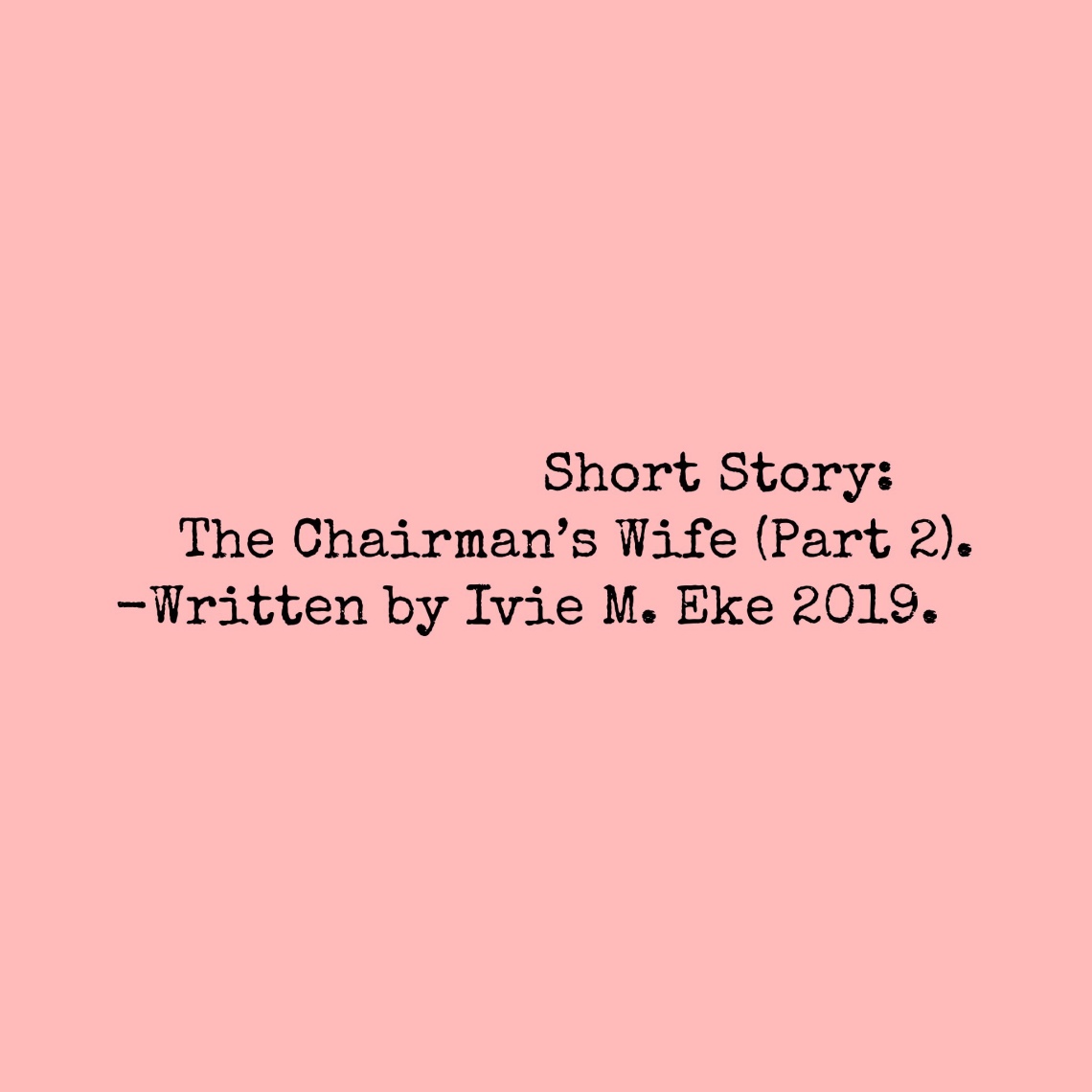 He cleared his throat. ‘So…you’re my Boss’s wife? I guess I should call you Madam?’ Enahire sounded petulant to his own ears, but he couldn’t seem to help himself. He suddenly realized that he was sweating under his white Polo neck tshirt.

Enahire was suddenly tired. ‘Is there something you want?’

‘No. My husband has been going on for a long time about how efficient you are. I knew it was you, I just wanted to see for myself’.

She took a step closer to him, and he could smell her expensive perfume. Enahire stared into her eyes framed with eyelashes way too long to be natural, and suddenly felt his chest tighten.

‘I’ve missed you’, she said and moved in for a kiss.

Enahire stepped away from her so quickly that they both almost lost their balance.

‘Look, Rolake. I don’t know what game you’re playing. You broke up with me ages ago. 10 years, if I remember correctly. You’re married to my Boss. I won’t jeopardize my job for you’.

As she started to speak, Enahire’s phone beeped. He brought it out and saw a message from Emem: ‘I’m in front of the hall. Where are you?’

He frowned. Emem was here?

He looked up at Rolake, who was looking at him with an unreadable expression. ‘I have to go. I wish you all the best’.

Enahire walked past her and back into the hall, slipping past the dance floor where staff had now made a drunken circle whilst dancing to ‘Science Student’ by Olamide.

He reached the entrance and saw Emem looking pretty in a short green Ankara dress, typing out a message on her phone.

She looked up, and smiled. ‘Hi’

They embraced briefly. ‘Come in, the party is almost over but there’s plenty to eat’, Enahire said, but Emem shook her head.

Enahire nodded as a sense of dread enveloped him. They walked away from the hall towards thewell-lit carpark. Is she dumping me in a car park? He wondered. He dragged his feet as he walked behind her, looking at the precise cornrows on her head, wondering what was on her mind.

‘I need to tell you something’, she said as they stopped.

‘Okaayyyy’. Enahire was very wary at this point. He suddenly didn’t know what to do with his hands, and opted to shove them in his pockets.

‘There’s a reason why I avoid visiting you at your office’ said Emem. Enahire had no idea where she was going with this, so he said nothing and just waited.

‘Well, some years ago, after I graduated from UniAbuja, I worked part time for a Parastatal. Public Press Bureau’.

Enahire frowned. Why did that place sound familiar?

‘I dated my Supervisor for about 6 months before I resigned to start my National Youth Service…’ Enahire must have looked very blank because she added, ‘Chief Onwuka…was my Supervisor’. She was looking down at her hands now, fidgeting with the gold bangles on her wrists.

Enahire felt dazed. In what weird universe was his Boss the former Sugar Daddy of his current girlfriend, and the current husband of his ex-girlfriend?

‘I should have told you. I’m so sorry. I understand if you want to break up’, said Emem, though she didn’t sound like she wanted to break up.

‘I just…give me a minute’. Emem nodded as Enahire walked a few steps away from her, trying to gather his thoughts.

He needed to think. He sent a message to Mrs. Haruna, the Assistant Admin Manager who was still in the hall, telling her that he needed to leave the party urgently, before he walked back to Emem, who looked at him worriedly.

‘Okay. I’ve heard what you said, and I have a lot to think about. I’ll drop you at home and we’ll talk about this next week, okay?’ said Enahire.

‘Okay’. She looked relieved, and they walked wordlessly to his car.

The next Monday, the office was buzzing with stories from the Christmas party, and Enahire had a steady stream of colleagues stopping at his desk to congratulate him on how successful the party had been. No one seemed to have noticed his absence towards the tail end of the night, which bemused him.

He hadn’t spoken to Emem since the party; he hadn’t quite wrapped his head around what she had told him.

He was just getting engrossed with his tasks for the day when he got a call from Chief Onwuka’s Secretary: Chief wanted to see him immediately.

Enahire was surprised that his Boss was already at work at 10am, and he wondered if he was going to be told off for leaving before the party ended.

He took a deep breath, and then knocked on Chief’s door.

‘Good Morning Sir’ Enahire greeted him as he entered the office.

‘E-Boy! Great party yesterday. All our guests were very impressed. Well done. My Wife said that she had never eaten such delicious fish pepper soup’.

‘She mentioned at the party that she actually knows you from UniBen’. Chief said this as he looked down at his phone.

There was a slight pause. ‘Yes Sir’ was the only reply Enahire could come up with. Chief nodded, seemingly satisfied with his answer.

‘So. There have been decisions made about the staff evaluations last month. You will be promoted to Senior Admin Manager effective January-but keep the news to yourself until it’s officially announced, okay?’.

‘Thank you so much Sir, Thank you’. Chief nodded and smiled as he turned his attention to his iMac.

Enahire was full of joy as he turned to leave the office.

‘By the way…I stepped out of the hall to take a call…was that Emem I saw you talking to?’

Enahire was caught off-guard; he could only nod in response.

‘Hmm. Nice girl’, said Chief, and continued with his work, not looking at him.

Enahire stared at Chief for a moment before walking out of the office, feeling like he had won and lost a game at the same time.

He just didn’t know what the game was.

(I hope you enjoyed this story! Please leave your comments. Thanks for reading).

Thanks for reading-I appreciate all your likes and comments! Don't be shy; please share!